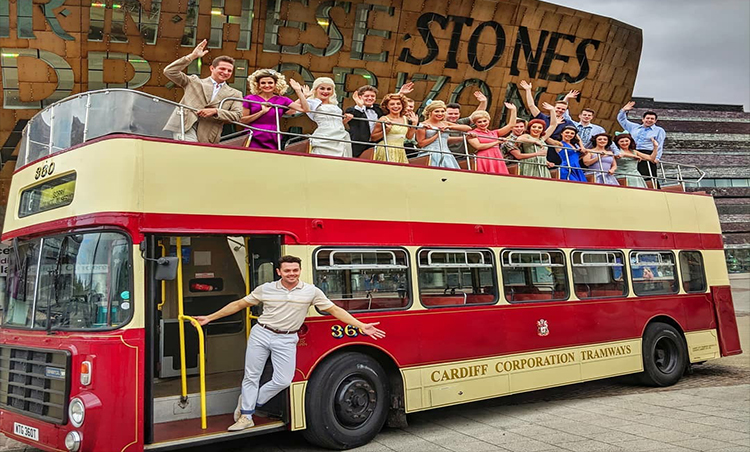 The National Eisteddfod 2018 came to an end on Saturday, and what a festival it was! But even though the awards have been handed out and the stalls have closed-up shop down the Bay, there’s still plenty of stuff to do around Cardiff, including Cardiff City’s first premiership home game of the season. Here’s our list of things to look out for this week.

There are dinosaurs on the loose in Cardiff, thankfully they don’t seem to causing too much damage. For the next two weeks Bute Park is an interactive Jurassic Park which is ours to explore! The only thing missing is Jeff Goldblum.

Lost Lands Cinema have got two great films lined up for this week, on Saturday they’ll be screening the Oscar-winning The Shape of Water, and on Sunday they’ll be showing cult classic Fear and Loathing in Las Vegas. As always there will be cocktails, beer and nachos for you to enjoy while you kick back on one of their deckchairs and lose yourself in the films.

Tickets to the rooftop here

Witness the medieval world come to life this weekend at Cardiff Castle, with knights battling each other and performing while you cheer from the sidelines. There’ll be loads of music, games, activities and displays to enjoy.

The Cardiff Bay Beach Festival has been a huge success again this year. It’s quickly becoming an annual summer highlight. The attractions this year include the Big Wheel, a roller coaster, big water spraying arches, movie nights and loads of food stalls and bars. The beach will be open throughout August, so let’s make the most of what’s left of the summer holidays.

The Bay Beach Festival is open 11am – 10pm Friday & Saturday

We love dogs here at It’s On, and any excuse to get out and about with our pets is fine by us. The Muddy Dog Challenge ‘the UK’s first 2.5km and 5km obstacle runs that you can take on with your dog. You can enter as a dog-and-human duo or go solo if your pampered pooch wants to sit out.’ However not only is the Challenge a great run that will have you and your canine chum both wagging your tails, it’s also a brilliant way of earning money for a fantastic cause: Battersea Dogs & Cats Home. We can’t say fairer than that. Just make sure you don’t wear your best clothes.

Struggling for ideas about how to keep the kids busy during the summer holiday? Look no further – on Saturday 18th August Rebel Arcade are holding a special Little Rebels edition of their usual fun games-filled events. Between 12pm and 6pm the upstairs of Tiny Rebel Cardiff will be welcoming gamers of all ages to have a go at loads of cool games, including virtual reality games, multiplayers and retro classics, as well as some recently released games.

DEPOT have really treated us this summer, organising some brilliant events, and their Summer Feastival is going to be one of their best yet. Set in Sophia Gardens, Feastival will start on 17th August and will be open to the public every Friday evening and all weekend until 9th September. There will great food stalls to choose form, including some award-winning food traders such as Brother Thai and Meat & Greek, as well as loads of entertainment. To top it all off – entry is free!

Yoga in the park – Launching next week inside FEASTIVAL

Summer Holiday at the WMC

Starring Ray Quinn and based on the iconic Cliff Richard film, Summer Holiday The Musical is sure to put a smile on your face this month. The hit iconic 1960’s film starring Cliff Richard is now the feel- good musical of the year bringing music, laughter and fun to the stage as it becomes the happiest hit musical around. Ray Quinn stars as Don (originally played by Cliff in the film) who heads on a fun packed boys trip in a London bus visiting Paris, The Alps, Italy and Greece, in search of a good time and a brilliant summer.

Cardiff City’s first ever Premiership season didn’t get off to the dream start, losing 2-0 to Bournemouth, but we can put it down to settling in nerves. They’ll be hoping for a better result on Saturday, in front of their home fans, against Newcastle United. Tickets are hard to come by, but even if you aren’t going to the stadium to watch the match, the atmosphere will be electric around the rest of the Cardiff too. Expect a sea of blue shirts throughout the city.

Tom Walker is heading out on tour and coming to Cardiff