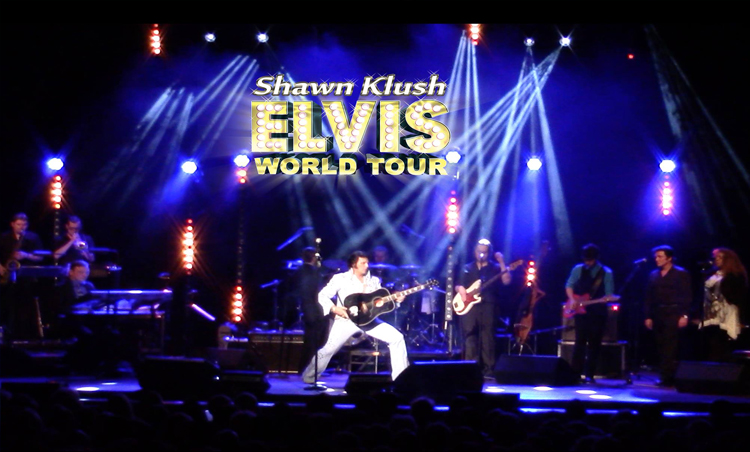 Direct from the USA –  The world’s leading Elvis tribute show comes touches down in the UK for an 8 date arena/major venue tour this week – stopping at the famous Motorpoint Arena on Friday 18th May.
‘The Elvis World Tour’ is the world’s largest and most successful touring Elvis tribute show and stars America’s finest Shawn Klush and Dean Z backed by an incredible live band and orchestra.
Shawn Klush first exploded onto the UK scene when millions of UK viewers tuned in to see him win BBC One Television’s search for “The World’s Greatest Elvis”, hosted by Vernon Kay.
Shortly after, Shawn was also crowned Ultimate Elvis Tribute Artist Champion after winning the first ever official contest held by Elvis Presley Enterprises in Memphis, Tennessee.
Fellow American Elvis tribute, Dean Z, performs both the Early Years of Elvis and the 1968 Comeback Special. He is also a grand champion of the prestigious EPE Ultimate Elvis Tribute Artist Contest and star of the famous Las Vegas show – Legends In Concert.
Now, both artists are starring in the ground-breaking production The Elvis World Tour which, in recent years, has been taking the UK by storm with appearances in arenas and major theatres across the UK.
Don’t miss The Elvis World Tour live at Motorpoint Arena Cardiff on Friday 18 May 2018 at 7.30pm.  Tickets can be purchased online at www.elvisworldtour.co.uk or motorpointarenacardiff.co.uk
Preview post