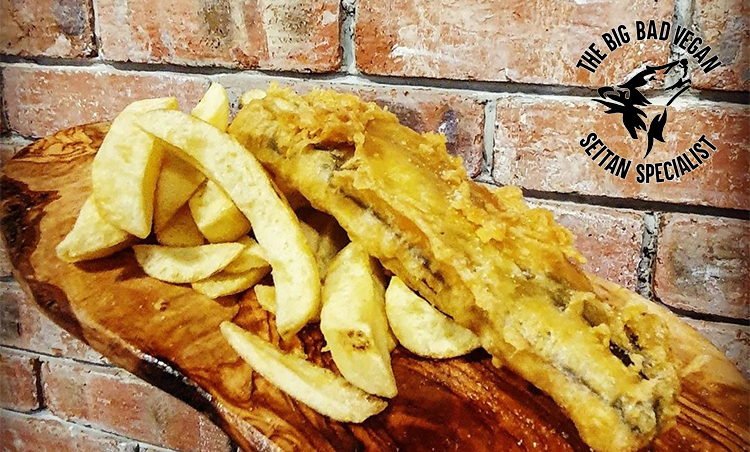 Listen up vegans! The Big Bad Vegan has launched in Fryers Club chip shop on Cowbridge Road, Ely after first launching in the Uttoxeter branch.

The vegan alternative to the food once loved and enjoyed, but made in a more compassionate and cruelty-free manner using plant-based ingredients.

The man behind it all, Scott Watkins, from Barry created the company from scratch. Scott said that he had previously worked in various vegan foodie businesses and companies with various partners, but never felt his drive for vegan food had shone through in order to establish a successful business; so Scott found himself eager to go his own way and single-handedly built up his own company, The Big Bad Vegan.

Scott’s business operates as a ‘dark kitchen,’ where Scott creates the product and ships them over to several stores and cafes. One well-known local outlet selling Scott’s delicious vegan produce is Mother Nature cafe in the Goodsheds, Barry.

Scott said, “My ethos behind it is when I went vegan around 10-years-ago, I couldn’t find any of this stuff! [replicas of the food he once enjoyed]; I was making it for myself and I just improved on it year after year, and it’s bangin’!” he laughed.

After perfecting his recipes, Scott is only at the beginning of his journey, yet at the forefront of the Vegan food market in South Wales. Scott is hoping to expand his product to launch and supply 11 Fryers Club chip shops across England and Wales in the coming weeks.

Another, eager to source The Big Bad Vegan produce is Veggie Corner based in Coventry, a strictly veggie and vegan food restaurant desperate to collaborate with Scott in the future.

If you’re lucky to have already tried some of The Big Bad Vegan alternatives at pop up events such as Academy Espresso bar, then lucky you! Here’s what you can get your paws on in store.

Scott had been pondering the vegan alternative to a fish fillet for many years. He said that he has had the recipe for his ‘Fysh fillet’ swimming around in his head for “yonks,” and with many trial and errors, the plant-based crispy ‘Fysh fillet,’ “clicked into place” and became a thing of perfection.

Known for his sossij patties with scrambled vegg topped with classic chz, Scott is a fan of the alternative spellings for his vegan dishes. However, if you’re anything like us and craving some of The Big Bad Vegan fast food, you’ll notice that the menu itself has ditched the funky spellings.

Scott said, “The spelling is down to making things simple for the customers, so as not to confuse them.”

In the next few days, Scott will be providing samples to local vegan stores and chip shops for the public to try and have a taste of his 10-year perfected recipes of The Big Bad Vegan produce.

Let us know your thoughts on the new vegan chippy grub!

The Depot Warehouse to relocate from Cardiff’s Dumballs Road

CRAFTY DEVIL TO OPEN NEW VENUE IN THE HEART OF PENARTH