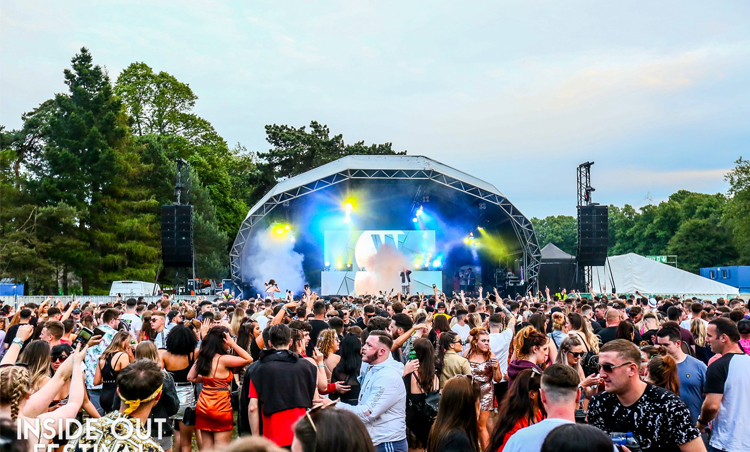 The Cardiff Summer of Music 2022 promises to be Bigger and Better than ever!

Soon those cloudy skies will fade away and it will be time to embark on a huge season of open air concerts coming to the city this year. This looks like one of the biggest yet for the capitol of Wales as Cardiff’s Summer of Music 2022 promises to deliver for fans of all genres of music. Here’s our list of just some of the biggest names coming to the Cardiff this year!

The summer of music is taking place in many spots around the city, but few can be as picturesque as Bute park. Surrounded by the trees and green spaces of the capital provides the perfect back drop to experience some amazing bands.

Inside out festival – 1st May

In the hope of swapping wellies for sunnies this year, Inside Out has moved to the May bank holiday weekend, you can catch Kurupt FM, Andy C and Idris Elba in a weekend of DJ’s and dance.

The prodigal sons of pop punk return to the city this year. After 20 years in the biz the MCR boys will be rocking out in the cricket ground at Sophia Gardens. Long live the Black Parade.

The Libertines’ Up The Bracket 20th Anniversary Show – 5th Aug

The Boys in the Band are back to relive the good old days of their album Up the Bracket. What could be better than rediscovering your punky youth in the park this summer?

The castle has slowly been establishing itself as THE place to be for music lovers in Cardiff during the summertime. But it seems that the castle has shown us nothing yet, and 2022 is set to be their biggest year yet. There’s something here for absolutely everyone, from hall of fame royalty to Ibiza classics and up and coming superstars.

Find tickets for all events here.

The Camden Ska band have played across the globe and entertained crowds for nearly five decades! Their back catalogue is so extensive and full of absolute bangers its hard to imagine anything other than a world class show to kick off June.

Releasing his debut album in 2019, Dermot has had a meteoric rise to stardom landing him a solo show at the Castle amongst some prestigious names. After starting his career busking on the streets of Dublin at 17, he’s had a hell of a few years going from success to success and Cardiff is sure to give him a warm welcome in the castle this summer.

Known for his brutally honest lyrics and thick Glaswegian accent, Gerry Cinnamon has amassed a large cult following that has landed him a spot in the Castle for Cardiff’s summer of music. We will be there with everyone else belting out Belter and dancing along to Canter this June. Its been a long wait since he’s been delayed for 2 years during the pandemic but Gerry is finally on his way.

Rising to fame as the lead singer of the Supremes in the 70’s and establishing them as one of the worlds most successful female groups of all time, Diana Ross barely needs an introduction. Her name alone ensures that this event is going to be an absolute knock out. For fans of Motown, it’s a must. For fans of music in general, it’s a dream come true for a queen of the industry to grace the castle with her music this year.

Defected in the Castle – 2nd July

After 20 years of bringing club classics and dance tracks to the UK, Defected Records are ready to bring you a night of dance in the open air. Proud sponsors of the club night Shangri La that has provided to soundtrack to so many Cardiff nights out over the years, Defected are sure to deliver a night of dance you won’t forget. Better start practicing some of your moves!

The global superstar DJ is bringing Ibiza to Cardiff. After a sensational show a couple of years ago we’re ecstatic to hear he’s coming back to the Castle, and he’s bringing his long-time collaborator and conductor, Jules Buckley, and The Heritage Orchestra with him. Not to be missed.

Celebrating their 5th birthday, the Depot have proven themselves so much more than an events space for the city and have established a much loved and ever growing festival in the city. Announced so far for the line up is Rag-n-Bone Man, and with previous headliners like Sister Sledge, Kaiser Chiefs and Clean Bandit, you know the rest of the acts will be world class. Now spread over 2 days, you should grab your tickets early and keep an eye on their socials for the reveal of the next acts.

Another international mega star, Bryan Guy Adams OC OBC; guitarist, singer, composer, record producer, photographer and one of the best-selling music artists of all time. Sold? Just think of a warm summer night in the castle surrounded by thousands of fans belting out ‘Summer of 69’ at the top of their lungs. Definitely sold now right?

The smooth talking, Canadian heart throb is coming to Cardiff. He’s toured the world and sung for millions across the globe, but, he just hasn’t met you yet has he? Grab your tickets while you can because you know Michael is going to pull out all the stops for an open air gig in a castle for the friendliest city in the UK.

The troublemaker himself is also coming to the castle this year! The invitations have been sent, he wants to dance with you on the night of July 21st. You’ve got a day to recover from Bublé sweeping you off your feet before Mr Murs does it all over again!

Shout, shout, let it all out, come on, I’m talking to you, come on for one last blast in the Castle this summer. Pop royalty are closing out the events in the castle this summer, and Tears For Fears are sure to put on a show with a healthy dose of 80’s nostalgia. Last chance to dance in the open air in the heart of the city this year, don’t miss out.

Another new comer on the summer party scene, Alexandra Head has already proven itself to be a beautiful venue where you can dance and sing, surrounded by the picturesque scenery of the Bay. A mix of acts are coming to the city this year to keep you grooving and belting out your favourite hits by the water.

Big dance night to start off the week of events at Alexandra Head, Chase & Status headline a night of DJ’s on at the bay side venue. Joined by Wilkinson, Shy FX and Kings of the Rollers, you might want to hit some clubs to get in good dancing shape for this one. Its expected to be a whole night of crazy dancing chaos.

If you’ve still got some left in the tank after Chase & Status you can head back down the bay the next evening for another night of DJ sets and dance anthems. CamelPhat are another DJ duo that have toured the world, bringing big beats to the masses. This is sure to be a wild one.

A bit calmer than the first two gigs at Alexandra Head, but no less legendary. Current global mega star Lewis Capaldi will also be appearing down the bay for a solo show you know is going to be emotional and powerful. The 25 year old has had an unbelievable start to his career in the last few years and we can’t wait to see him live this summer.

If you keep holding on, you can head back to the bay the next night for the legend that is Mick Hucknall and Simply Red. Another slice of 80’s nostalgia, Simply Red are sure to bring out all the bangers you know and love. Just imagine seeing the sun set over the bay when If You Don’t Know Me By Now comes on… magical.

Finishing off the summer at the bay with a party, a trio of music icons are going to keep you moving to the very last son. The legends behind the transformative albums Screamadelica, Pills ‘n’ Thrills and Bellyaches and The Warning have joined forces to close out a summer of music across the water of the bay. What a way to end the summer season for Cardiff!

And that’s our list! Enough choice for you? We hope so because it seems that some of the biggest names in music are coming to visit us this year, and we cannot wait to dance along with them.

In It Together Festival

On 3rd – 5th June 2022, ‘In It Together Festival’ will bring something to the lush Welsh valleys that the country has never seen before: 40,000 people, five stages of world-class, multi-genre music, and three days of rich entertainment and cultural enlightenment that will go down in history at Newlands Farm, Margam.

JUST days after announcing that tickets for next year’s 20th anniversary event had gone on sale, organisers of Green Man Festival have revealed that the event is already sold out. This year Headlining the festival this year is acclaimed singer-songwriter Michael Kiwanuka, who is sure to set the Mountain Stage alight with his blend of rock and soul.