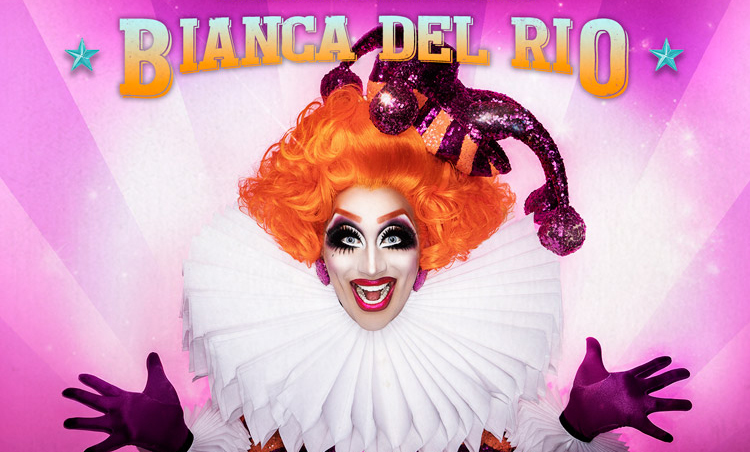 Catch the sell-out drag and comedy sensation and Ru Paul’s Drag Race champion Bianca Del Rio on her UK tour when it stops in Cardiff.

The brand new It’s Jester Joke tour will be the biggest ever solo drag show in the UK.

It’s visiting 13 cities including a date in Cardiff on September 17th.

Tickets on sale Friday 5 October 2018 at 9am via www.Ticketmaster.co.uk

Following two consecutive sell-out UK tours, including three sold out nights at London’s Eventim Apollo – comedy queen and RuPaul’s Drag Race champion Bianca Del Rio has announced that she will be returning to the UK for an unprecedented arena tour from Saturday 1 September – 24 September 2019. The brand new ‘It’s Jester Joke’ Tour will travel the length and breadth of the country bringing her irreverent, side-splitting comedy to 13 cities including dates at SSE Wembley Arena, B1 Birmingham Arena, Motorpoint Cardiff Arena and more in what will be the biggest ever solo drag show in the UK.

The self-proclaimed ‘Clown in a Gown’ will tell tales of her world travels and the outrageous circus that is her life on the most ambitious solo drag show tour in history on her brand-new comedy show ‘It’s Jester Joke’. Irreverent and fierce, Bianca is guaranteed to keep audiences in stitches with her comical ‘tell-it-like-it-is’ views, from politics and travel to family and social media that has seen her become one the biggest drag superstars in the world today. Don’t miss the chance to see The Queen of Mean in her uncompromisingly funny new show in September 2019.

Bianca Del Rio, the alter ego of seasoned comic Roy Haylock, has well and truly taken the world by storm. After quickly becoming the front-runner on the sixth season of RuPaul’s Drag Race Bianca was crowned the winner in May 2014. The incredibly popular champion has amassed a huge following worldwide, with her Instagram soaring to over one million followers and previous shows ‘The Rolodex of Hate’, ‘Not Today Satan’ and ‘Blame It On Bianca Del Rio’ selling out globally.