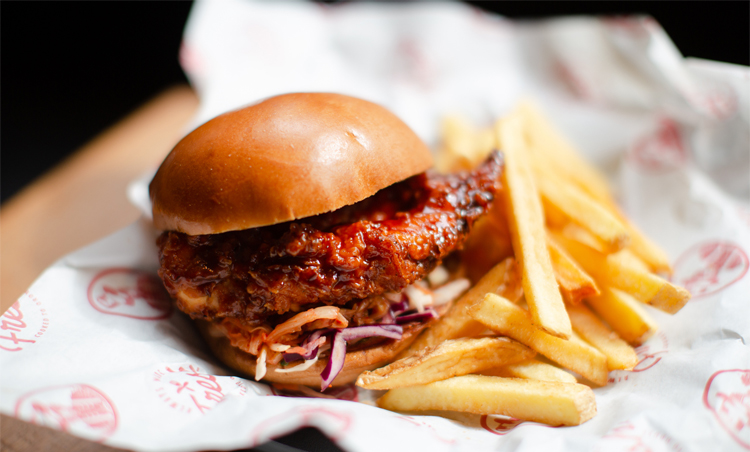 The American chicken diner Slim Chickens is going out of its way to come to the aid of us penny-pinchers by offering FREE chicken when they launch this weekend!

Renowned US brand Slim Chickens is winging its way to the streets of Cardiff this weekend to give consumers an “unmistakable flavour” of the American South.

The cult chicken restaurant, which is set to open in Cardiff next month, will be handing out free samples of the brand’s chicken tenders alongside its iconic dipping sauces, which come in 13 flavours including Garlic Parmesan, Mango Habanero, Honey BBQ, Blue Cheese and Sriracha Garlic to name a few.

Food fans will be able to treat their taste buds to moreish chicken and finger-licking sauces on the Hayes on November 23 and 24.

Slim Chickens will open its new 92-seater restaurant in St David’s on the 18th December.

The restaurant’s menu will feature freshly prepared signature chicken tenders, chicken sandwiches and chicken wings, as well as quintessential Southern sides, including mac and cheese, fried pickles and Texas toast. For those with a sweet tooth, there will also be milkshakes, fried pies and jar desserts on offer.

Adding to the restaurant’s Southern ambience will be screenings of traditional American sports along with modern blues background music.

Thanks to this success, UK franchise owners Boparan Restaurant Group (BRG) are now aiming to roll out the American restaurant chain to other cities across the UK next year.

CEO of BRG Tom Crowley said: “We are so excited to be bringing Slim Chickens’ unique American flavours, ambience, and hospitality to a whole new Welsh audience.

“Before the December launch, we wanted to give the people of Cardiff a sneak peek into our offering.

“With 13 moreish flavours to choose from, which perfectly complement our mouth-watering chicken, we think people will simply love our offering.”

Several launch parties and a promotional tour are planned for the Cardiff launch, so the brand is urging consumers to follow its social media channels @slimchickensuk for the latest updates and to download the ‘Slim Chickens UK’ app for a special treat when they officially open.

Sam Divine: Openers UK Tour comes to Cardiff and we have 4 tickets to give away

Another secret cocktail bar is opening and we can’t wait!