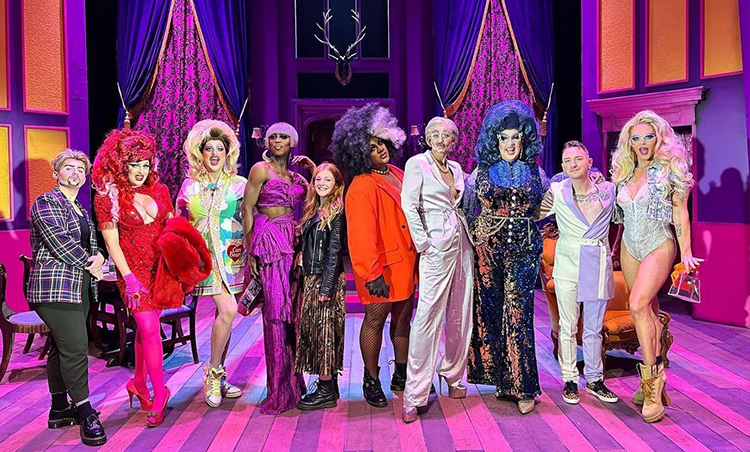 The ‘Dragatha Christie’ murder mystery has arrived in Cardiff

Murder, mystery, comedy, suspense, drama, twists, and an all-star cast of queens, we always suspected Death Drop was going to deliver a night of laughs a plenty and it didn’t disappoint. Featuring Ru-Paul legends from across the globe like Ra’Jah O’Hara and William from the US, Karen from Finance shipping in from Down Under, and the UK’s own Vinegar Strokes the cast deliver a ferocious performance that’s come hot off the West End.

Set on the remote and mysterious Tuck Island in the early Nineties, a dinner party like no other ends in murder. Outrageous guests, questionable pasts, and more one-liners than a Ken Dodd special are in store for the royal guests. After last month’s grand reopening with Priscilla Queen of the Desert, it felt like Cardiff audiences were hungry for more shows centred around the Pride community and Death Drop delivered. The Ru-Paul alumni brought all the sass and showbiz they are known for after having sashayed away from the small screen.

A couple of standouts for me was the performances of Holly Stars and Richard Energy. The identical Cheesy triplets all performed by Stars brought in some of the biggest laughs of the night, keeping the energy of the whole show up from curtain rise to fall. While Richard Energy brought an incredible camp silliness to the role of misogynistic Tory MP Rich Whiteman, giving off vibes of a manic Basil Faulty.

Not only was it a genuinely hilarious and outrageous comedy, but Death Drop also presented a decent whodunnit to unpack, with some twists and shock reveals. The set looked and felt like an old Scooby Doo cartoon, adding to the camp and ridiculous events of the drag comedy.

For certain if you love Ru Paul’s Drag Race, you will love Death Drop. The whole show feels like something cooked up by the contestants for one of the weekly challenges, with references to the wider drag community and to Ru Paul himself.

Overall, Death Drop is anything but a drag, its quick witted, hilarious and above all a great night out at the theatre. You won’t regret checking into this barmy dinner party on Tuck Island, even if the bathrooms are filthy and the guests are dropping like flies in increasingly comical fashion. The murders were brutal, the insults were cutting, and the dance numbers were fabulous. We’re going to give Death Drop four Drags out of five Queens. A hysterical camp delight.

We couldn’t have loved it more – do yourself a favour and pick up a ticket today.