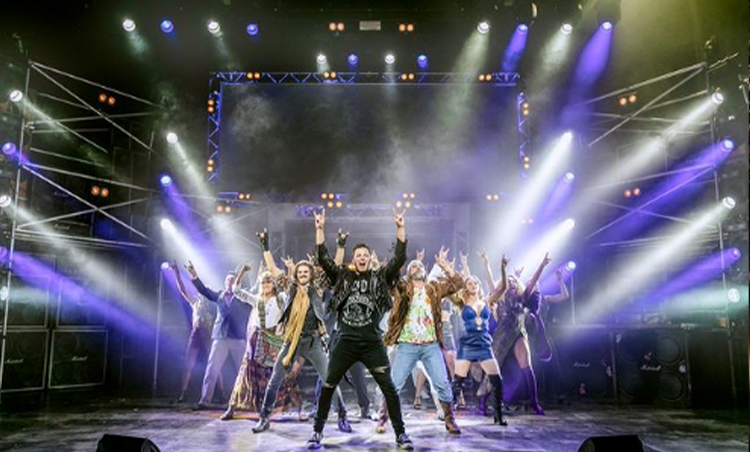 Rock your socks off with this fantastic feel good musical

From the moment you take your seats you become immersed in a show paying homage to rock music, the set it basic but detailed enough to allow it to be the backdrop for the entire show with only a few subtle additions to move through different settings for the show! The blend of lighting on rigging as though at a rock festival, walls of Marshall speakers and a small stage, a digital screen allows different scenes to bet set throughout and was a nice touch. What really stands out however is the incredible live band who treat us to some awesome live music throughout the show, you know you’re in for a treat when the opening scene involves an amazing live guitar rift!

The amount of audience interaction during the was refreshing and looking round you could see smiles and hear whoops of joy throughout the show as the narrator commands the audience’s attention and participation in such an endearing way you feel compelled to join in. The show is raunchy in parts, hilarious in others and entertaining throughout with some stunning vocals by the performers accompanied of course by the live rock band.

Rock of Ages begins in ‘The Bourbon Room’ bar, a somewhat forgotten about rock bar in the Sunset Strip of L.A during the “mid to late 80’s” according to the narrator, Lonny (Joe Gash) a flamboyant, suggestive, camp and frankly outrageous character who is somewhat of a cross between Captain Jack Sparrow meets Russel brand! Think long hair, guy liner, tattoos and a lot of wrist flicking and there you have him, all finished off with a fantastic vocal range and joke a plenty to keep the audience laughing and spirits high. Lonny even picks out a lady in the audience to reference throughout the entire show this time it was a lady who became ‘Kinky Kath’. Credit and special mention to Joe Gash as this character was superb.

The storyline of the show is based on a young wannabe rockstar Drew trying to make it big who then meets an ambitious actress Sherrie, the plot follows the young couple’s rocky journey (no pun intended) to trying to achieve their dreams whilst navigating their feelings for one another. During the show, the bar is threatened to be sold to German property developers and then demolished,  both characters are hilarious and very well played. The bar owner then comes up with a plan to save it by putting on a show starring a famous rockstar, Stacee Jax played by former X-factor winner Matt Terry, a womaniser and all round arrogant chap, he plays the part brilliantly with his swagger and hair tossing and his voice is truly formidable.

The musical is packed full of well known rock songs including songs from Journey, White Snake, Europe but to name a few which are guaranteed to have you clapping, humming and even singing along, there was a real buzz in the theatre during the show as the majority of the audience probably shared a love of the rock songs of years gone by. Rock of Ages was absolutely brilliant, funny, saucy, raunchy and incredible music the standing ovation well deserved a treat for lovers of rock music and musicals alike!