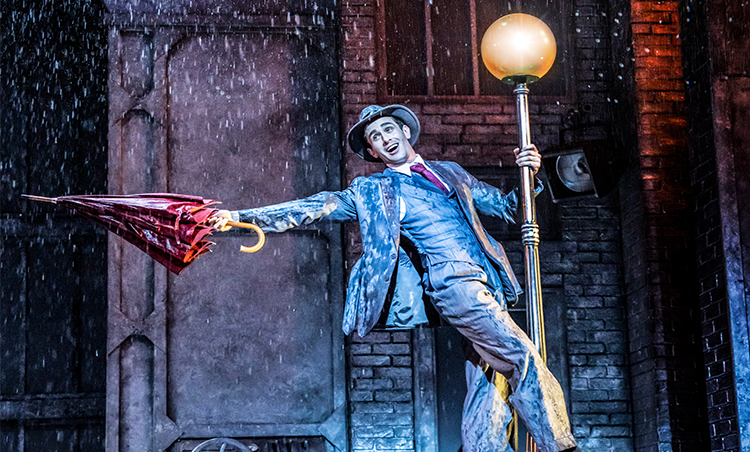 Singin’ In The Rain pours into the Wales Millennium Centre this week, bringing back the classic musical style of the 50’s where it all started. Iconic hits, complex and spectacular dance numbers, star studded cast, this show can barely put a foot wrong. We went to the opening night of the monumental musical hit.

With the long awaited return of the ‘classic musical’ to our cinema screens in recent years, with award winning hits like La La Land and The Greatest Showman, and the announcement of a Fred Austere biopic in the works with Tom Holland in the leading role, its clear that audiences still crave that authentic old school musical magic. And boy does Singin’ In The Rain deliver that in spades. With an impressively creative set and timeless story of stolen stardom to work with, Jonathan Church’s critically acclaimed stage adaptation of the 1952 movie kicks off with a bang. You almost have to choose where to look when watching the dance numbers, with so much detail and creativity playing out on the stage, every single member of the cast has their work cut out. There is as much going on in the background as there is in centre stage for many of the big ensemble numbers throughout the show, making this a stunning collage of musical excellence right from the first song.

The cast were as superb as you’d expect for such an iconic show, and with a whole host of touring stars we were lucky enough to see Strictly Come Dancing legend Kevin Clifton in the role of Cosmo Brown. He brought the wit and comedic timing required with ease to the role and earned some of the biggest laughs from the audience, closely followed by Jenny Gayner’s character, Lina Lamont, who had the crowd in stitches on more than one occasion. The comedy in general in the show was superbly executed, providing slapstick humour buy the boat load, especially during the iconic song Make em’ Laugh.

Of course, all the rest of your favourite hits are here too; Moses Supposes, Good Morning, You Were Meant For Me and the show stealer… Singin’ In The Rain. I mean this with absolute sincerity, I’ve never seen a more jaw dropping musical moment than Sam Lips recreating the Gene Kelly dance sequence on stage at the Millennium Centre. The ingenious set design allowed real rain to fall on stage, the live band swelled, and Lips danced to perfection, it truly encapsulated why I love going to see musicals in one phenomenal dance number. I promise you, seeing this performed live on stage is worth the price of admission alone. But be warned, Water Park rules apply… the first few rows are likely to get wet!

Overall, I cannot recommend Singin’ In The Rain highly enough. It is a classic for a reason, and the stage adaptation brings it to life with grace, wit, and spellbinding magic. If you are a fan of musical theatre in any way shape or form, then you have to go and see this show. Its an easy 5 stars, I would recommend it to anyone who will listen!

Singin’ In The Rain is playing at the Wales Millennium Centre until 28th May.