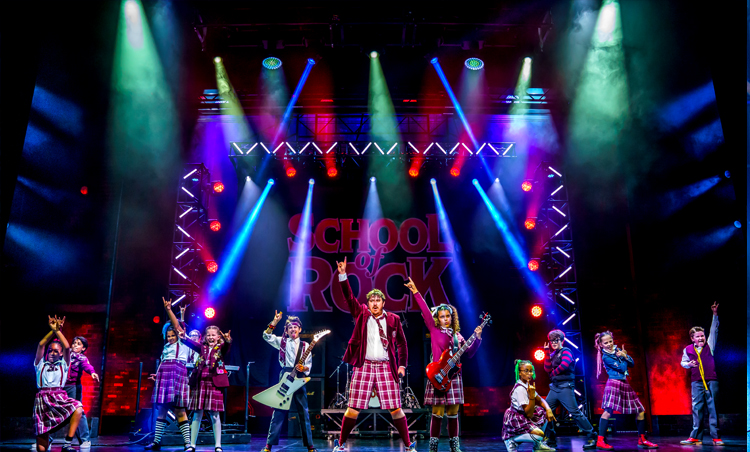 With soaring guitars, huge anthems and laughs a plenty, School of Rock the musical brings a modern twist to the classic Jack Black film in its first ever UK and Ireland tour.

The musical opens with Andrew Lloyd Webber announcing that the children play their own rock instruments on stage every night. If the talent of the new generation is what you’re here to see, then you well and truly will be blown away by the stage presence and musical abilities of the kids of Horace Green school.

Lead by the emphatically dedicated and charismatic Jake Sharp, playing the role of Dewey Finn, who delivers a performance that Jack Black himself would be proud of. A bundle of unpredictable energy complete with falsetto, yodels and a comedic wit that compliments the show perfectly.

The chemistry between Dewey and under the thumb best friend Ned Schneebly (Matthew Rowland) is a source of humour and works to juxtapose the by-the-book substitute teacher with Dewey’s couldn’t care less attitude.

There is a string of pop culture references throughout which made School of Rock current, funny and appealing to adults and children alike in the audience.

The set was simple yet effective in transporting the audience to the school setting. The ensemble performances were powerful, choreography sharp, and the house band were able to put on a show in and of themselves with fantastic musical accompaniment.

Although it would have been nice to see Dewey playing the guitar solos live on stage, no such complaints with the talented students: Freddy’s impressive drumming and Zack’s shredding guitar solos were executed with the confidence of people twice their age, owning their instruments and throwing devil horns to boot.

Fans of the movie needn’t fear, this adaptation does a sterling job of staying true to the story we know and love. Featuring original songs: You’re Not Hardcore and School of Rock, as well as 14 brand new songs penned by Andrew Lloyd Webber which bring this show to life. Stick it to the Man is a new number that harbours the spirit of the movie and the no-rules, carefree attitude of rock music.

The show allows for a deeper delve into the children’s lives, expanding the storytelling potential of prep school students turned rockstars. The emotion is even more profound onstage with heartfelt number If Only You Would Listen sung by the students, imploring their success-driven parents to pay attention to how they feel.

Special mention must also go to the powerhouse ballad Where Did the Rock Go? sung with gusto and pure emotion by Miss Mullins (Rebecca Lock). The uptight principal was perfectly characterised and was accompanied by flawless, yet amusing soprano vocals.

The only slight complaint would be the ten-minutes-too-long first act which was slow in its initial build up, however School of Rock packs a punch and will definitely rock your socks off!

For anyone who said you should never work with kids or animals really ought to re-evaluate their stance. This goes to show what can be done with a dozen charismatic kids, a heartfelt narrative and an enjoyable musical score. This cast of makeshift rockers deliver a performance that is not to be missed.

Tickets can be found at School of Rock | Wales Millennium Centre (wmc.org.uk)

A Hot-Tub cinema is coming to Cardiff