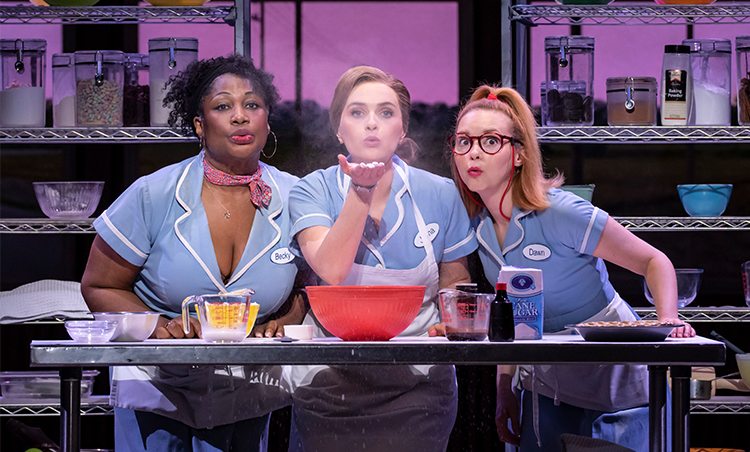 Another smash-hit West End musical is currently being served to Cardiff in the Wales Millennium Centre. Fan-favourite, Waitress, serves up a piping hot slice of musical pie and is not one to be missed!

A modern musical that has been much loved since its initial release in 2015 is finally on tour. Penned by acclaimed screenwriter Jessie Nelson, directed by Tony Award-winner Diane Paulus, with music by the Grammy award-winning Sara Bareilles, and starring small-screen star Chelsea Halfpenny, Waitress is a female-led force to be reckoned with. Following the exploits of Jenna, an expert pie-maker, in her pursuit for happiness, this musical is an absolute feel-good delight that will have you toe-tapping and grinning from ear to ear for days after the final curtain has dropped.

That’s not to say though that the show does not have its darker moments. There are some particularly hard hitting scenes between leading lady Halfpenny and Tamlyn Henderson, which to me felt out of place in this brisk comedy musical. Not to the detriment of the actors, these scenes were performed so well that they felt part of a much deeper drama, and really brought reality crashing down on the audience. Luckily, there is plenty of comedy to outweigh the darker tones, with some particularly hilarious (and raunchy) scenes between the three leading ladies and their partners. The vast majority of this show has comedic moments, songs and scenes coming in by the trolley load making Waitress a bright fun musical to watch. Waitress reminded me a lot of the 2010’s musical style that saw shows like Glee soar in popularity, combining comedy, music and deeper topics in one package.

The set design was impressive, opting for fewer major background pieces than most major touring shows, and choosing instead to focus on a wide variety of smaller fast moving props. It was magical to see all members of the ensemble helping to bring pie ingredients flying from shelves, only to have them thrown across the stage in messy and visually striking dance numbers. The whole look of the show was modern and stylised, and I particularly loved seeing the band on stage, and having them become part of the background patrons in the Diner was a nice touch.

Overall, Waitress was a fun filled and glamorous musical that tackles some hard hitting issues with style. Since this is an overwhelming fan favourite for musical lovers in recent years, I am sure many readers have already heard of it and are delighted its finally making its Welsh debut this week. If you have not then all you need to know going in is that Waitress is sexy, striking, sweet-sounding, serious, and silly all baked up in one delicious musical pie. It gets four stars from me, its well worth stopping by the Millennium Centre this week for a slice of musical fun.