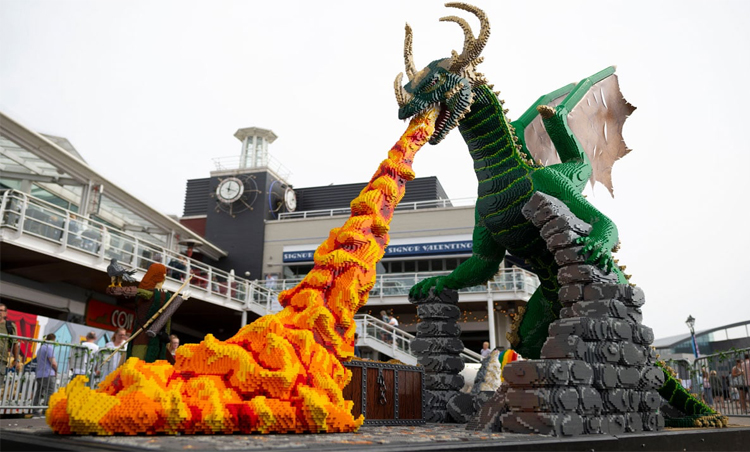 Cardiff Bay is home to mythical creatures and more now that the BRICKLIVE Fantasy Kingdom has landed at Mermaid Quay.

Nine fabulous models made with a total of nearly 750,000 LEGO® bricks have taken over Tacoma Square, in the heart of Mermaid Quay, until Sunday 1st September.

Free to view, the display features an 11ft fire-breathing dragon, a unicorn and two hunting wolves as well as a wizard, princess, knight and huntswoman. Collectively the models took over 2,000 hours to build. There are also cute dragon whelps (baby dragons) displayed in the windows of various businesses in Mermaid Quay.

At the heart of the display is a throne – laid out in shimmering silk and encrusted with the finest LEGO® brick rubies, emeralds and sapphires – on which visitors can sit and take selfies. Mermaid Quay is running a weekly photo competition to crown a Selfie King or Queen each week – with FREE ice cream for a year from Cadwaladers Mermaid Quay as the weekly prize.

In addition, Mermaid Quay is running a host of other competitions, including:

This is the first time BRICKLIVE’s Fantasy Kingdom have been be on display in Wales and follows the success of previous displays at Mermaid Quay including the Great Brick Safari, Santa’s Sleigh and Big Cats, which all attracted many thousands of visitors.

The display is visible any time, but the throne will only be available to sit on 10am – 6pm daily. Visiting the installation is free of charge.

Back stage at Kinky Boots the smash hit musical

Christmas Events You Can Still Do This Year

The Emirates FA Cup Trophy Is In Cardiff This Week