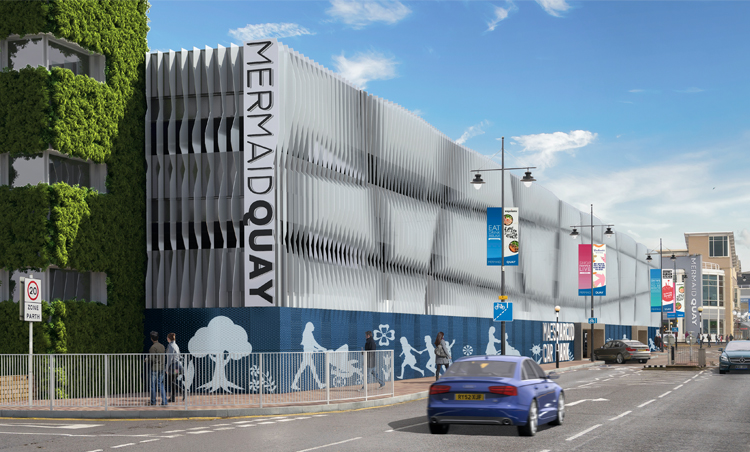 Cardiff Council’s planning committee has voted to grant Schroder UK Real Estate Fund (‘SREF’), the owner of Mermaid Quay, the popular mixed-use destination on the waterfront in Cardiff Bay, planning consent for the extension and improvement of the centre’s car park.   The planning application was submitted in April 2019.

The car park extension, which has been designed by the Cardiff office of architects Austin Smith Lord, is the latest phase in the fund’s multi-million pound strategic repositioning of Mermaid Quay, in line with Cardiff Council’s ambitious vision for the future of the Bay.

Built 20 years ago, at the same time as the rest of Mermaid Quay, it was always planned that the car park would be extended at some time in the future as Cardiff Bay grew.  The foundations and existing two levels were constructed to support a much larger structure, enabling the extension to be delivered with the minimum disruption and in an as environmentally sustainable way as possible.

Now, the car park is often full at peak times and demand for enhanced parking facilities is likely to increase with SREF’s investment in Mermaid Quay – including the new Everyman cinema which opened in December 2019. The development will also host new restaurant brands that are being introduced (including Cosy Club and Hubbox) and the new public realm project that is planned, alongside the extension to Techniquest and the Council’s proposals for an Indoor Arena and other new leisure facilities in the Bay.

Following the planning committee’s decision, work will now start on detailed design, appointments and legal matters as well as discharging various planning conditions, with a view to starting on site during 2021.  The project will take six to eight months to complete.

As part of the consultation process, local residents raised a number of amenity issues and fears about anti-social behaviour by car park users, which SREF has undertaken to try to alleviate via various management initiatives including enhanced security, signage, landscaping and changes to access arrangements.

“The redevelopment of the Mermaid Quay car park outlines Schroder UK Real Estate Fund’s commitment to the Cardiff Bay area, and will be possible following the planning committee’s decision. This car park provides parking for visitors to the waterfront, including Mermaid Quay, and the wider Cardiff Bay area attractions, including Techniquest, the Wales Millennium Centre and Roald Dahl Plass. It is well used and often reaches capacity.

“More parking is, therefore, vital for Cardiff Bay and we believe that extending our existing car park is more sustainable than developing another to meet the existing demand from visitors. The car park will also provide extra capacity to support the Council’s ambitious plans for further leisure facilities across the bay area, including the new Indoor Arena.”

A splash of colour: Cardiff is getting a lick of paint