Author It's On Editorial 512 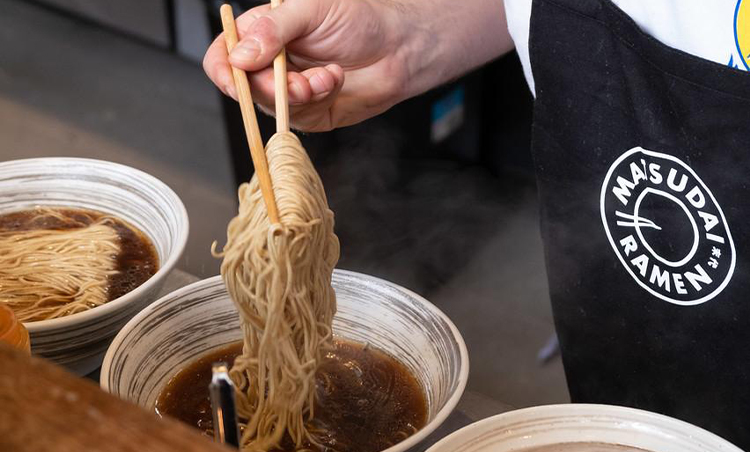 A new slurp-worthy ramen restaurant is moving into the old Natwest bank in Grangetown.

Just over two years since it was founded, cult Cardiff pop-up and ramen kit producer Matsudai Ramen has announced it will open its first bricks and mortar restaurant in early summer.

The site, which will be subtitled ‘Matsudai Ramen at The Bank’, still has the original vaults in the basement, and has most recently been used as a coffee shop and co-working space operated by Lufkin Coffee, who will rent a room and continue to operate a part-time roastery.

Matsudai Ramen was first launched in September 2019 by self-confessed ‘ramen geek’ James Chant. James had never set foot in a professional kitchen but was so disillusioned with the music industry work he had been doing all his life that his mental health had reached an all-time low.

When offered the chance of a pop-up, he grabbed at it with both hands – designing the logo, creating the dishes, building the website – relishing the chance to make something from scratch. He assumed it’d be a fun one-off.

The world had other ideas.

Since then, Matsidai Ramen’s successful pop-up events have taken over kitchens in London, Manchester and Bristol. Not even COVID-19 and the subsequent lockdowns could slow it down; James was quick to adapt and continued to win fans by delivering thousands of freshly prepared DIY ramen kits all over the UK.

This element of the business has continued to grow even as hospitality has reopened, and James now employs a staff of 7, who ship hundreds of kits to customers around the UK every week – and will continue to do so alongside running the new restaurant.

James has big plans for Matsudai’s new home. The refurb will be sympathetic to the history of the bank, keeping the original parquet flooring where the bank manager’s office used to be. Meanwhile, the high ceilings, and huge original windows will flood the space with natural light.

Once complete, the site will hold a maximum of 70 covers, including 10 seats at the bar overlooking a brand-new, open kitchen.

As at Matsudai’s pop-ups, the menu will feature an eclectic mix of ramen styles which will change with the seasons; a first in the UK. Guests who have previously dined at Matsudai’s pop ups will be pleased to hear that the karaage (a Japanese method of deep frying) chicken and mushrooms will be a permanent fixture on the menu, too.

The opening of the new restaurant will create employment opportunities for a further 8 staff.

James said: “Thanks to the audience who found us through our kits, we’ve been able to do sell-out pop-ups all over the UK, but the plan was always to open the first permanent Matsudai Ramen shop in my home town of Cardiff. It’s where everything began for us, and we’re so excited to have found this amazing space in Grangetown, which feels like the perfect fit.

For people who want to support us as we get ready to open, just ordering our kits is a huge help – so we hope people keep doing that! But we’ve been pulling in favours, and now we have some really exciting stuff to announce in the next few weeks, including supper club collaborations (with Tim Anderson amongst others), new and limited Matsudai merch, and an incredible opening party.

We want to give people a taste of the kinds of things we’ll be doing at the restaurant, and it will all help to raise some extra funds towards the refurb, too.”

For more information, visit: https://matsudai.co.uk, and to be the first to know about upcoming events, ramen specials and collaborations, sign up to the Matsudai mailing list at: https://tinyurl.com/matsudai-mailer.