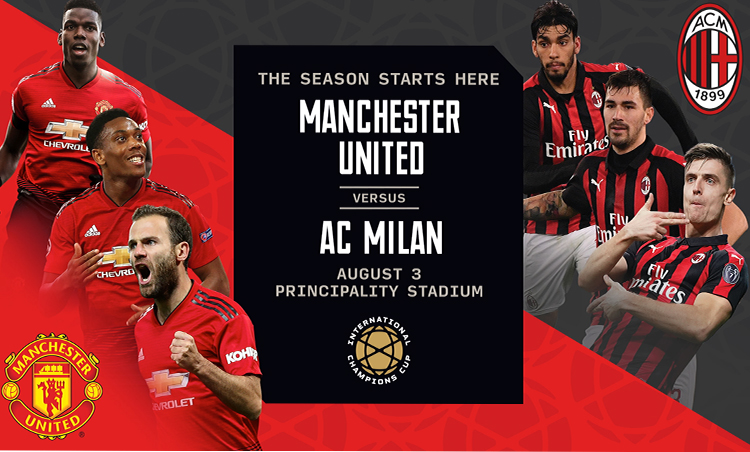 Manchester United could win their first trophy of Ole Gunnar Solskjær’s reign on Saturday 3rd August in Cardiff at the Principality Stadium.
United are currently unbeaten in the 2019 International Champions Cup, with wins against Inter and Tottenham in Asia, and face an AC Milan side that have yet to register a point in this year’s tournament.
A win for Ole Gunnar Solskjær’s side will take them to level on 9 points with Benfica but they will need to score 3 goals and not concede any to take the title.
Earlier in the summer Solskjær, confirmed that he will test close to his Premier League starting XI in Cardiff.
“We’re getting close to the league and playing against AC Milan in Cardiff is a great chance for us to put the full team out to test ourselves just before the league starts,” he said.
Manchester United fans will be eager to see new signing and Welshman Daniel James in action on home turf, having just made the move from Swansea City on a five-year contract worth £15million.
“We’re going to have to play our top team because we want to get into the league knowing each other and having some relationships built, so it will probably look like who will start in the first league game, maybe one or two changes.”
AC Milan’s goalkeeper Pepe Reina will be under pressure to keep Manchester United’s strikers at bay, saying the game will be a good test before the start of the season in an exclusive video interview with the ICC.
“To play against Manchester United is always a challenge. They are going to be one of the favourites to win the Premier League again this year.”
Reina says the Welsh crowd will help to create a great atmosphere for the match.
“The passion of the Welsh crowd is unbelievable. I still remember games with Spain against Wales and it’s always nice to play in front of such lively supporters. I expect nothing but a full crowd and we’ll be ready to give our best.”
With just one week left until kick-off, over 60,000 tickets have already sold. More tickets are still available from £25 Adult or £10 for Under-16s.
Preview post

Back stage at Kinky Boots the smash hit musical

The next bike scheme arrives in Cardiff