Author It's On Editorial 843 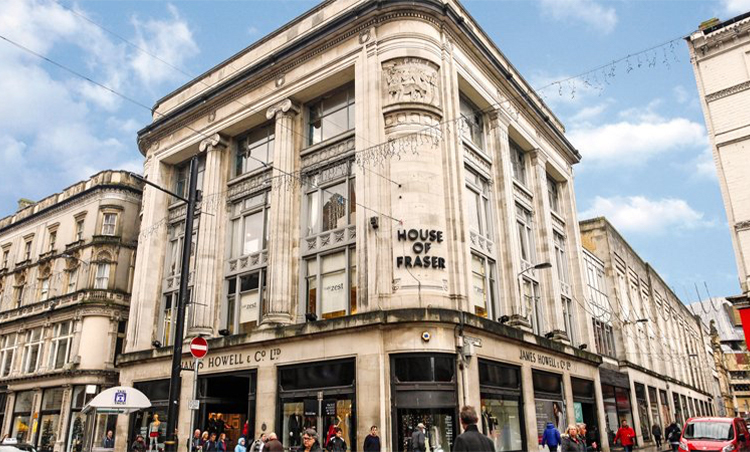 The new owners of the House of Fraser building in Cardiff have announced a 100 Million Transformation plan.

Thackeray Group, has acquired out of receivership the landmark Howells Building in the centre of Cardiff with plans to carry out a sensitive repositioning of the building as a mixed-use destination. The new plans aim to turn the building into an a part hotel, apartments, restaurants, shops, leisure offerings and office space.

The Howells Building is a 275,000 sq ft Grade II*-listed building on a 1.7-acre site, fronting St Mary Street, Wharton Street and Trinity Street in the city’s prime shopping district near to the St David’s Centre, Queen’s Arcade and The Hayes. It comprises an array of building forms, including the original 1800s’ stone façade fronting St Mary Street, 1909-designed square buildings on the corner of St Mary Street and Wharton Street, the Bethany Baptist Chapel in the middle of the building and a variety of more modern infill development.

The building is currently primarily occupied by House of Fraser, currently in 227,000 sq ft, with the Borough Arms pub occupying 2,500 sq ft over basement and ground floor fronting St Mary Street. It has planning consent for change of use from retail to mixed use.

Established by James Howell in 1865, the building is steeped in history and is one of the best-known and architecturally impressive buildings in Cardiff. The store was sold to House of Fraser in 1972 and a huge refurbishment project took place in 2009, although the ‘James Howell & Co’ signs still remains on the building, serving as a reminder of its rich 156-year heritage and the iconic status it holds in Cardiff.

Thackeray, which has a track record of regenerating and repurposing heritage sites into high-quality, mixed-use spaces, is aiming to carry out a net carbon zero regeneration of the building into an aparthotel, build-to-rent apartments, restaurants, shops, leisure offerings and office space. Thackeray’s £100 million plans also include a large central courtyard along with public realm improvements, which will be sympathetic to the original Percy Thomas-designed buildings.

Antony Alberti CEO of Thackeray Group, said: “This is an extremely exciting acquisition for Thackeray in a city that we love and further anchors our presence in Cardiff, which we are looking to continue to invest in. It is arguably the best collection of buildings in the city and we look forward to delivering a landmark scheme for this capital city.

“Sustainability will be at the heart of our plans, and we are aiming for the regeneration to be net carbon zero.

“This is our seventh acquisition in the last 24 months and increases our holdings in Cardiff to 0.5m sq ft. We believe Cardiff is a dynamic and vibrant city with a wonderful history and is rapidly becoming one of the top cities in the UK. We want to continue to promote and improve Cardiff’s attributes and contribute to the future vision of the city.”