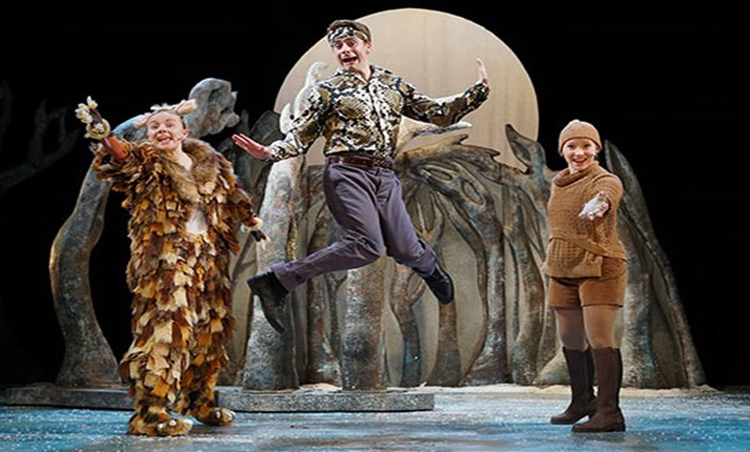 When you take your kids to see a show and the first thing they say when you leave is “can we watch it again?”, you know you’re onto a winner. That was the verdict from my three kids after seeing The Gruffalo’s Child live at the New Theatre.

Anyone who doesn’t have children under the age of 10 might not know much about the Gruffalo, but to those of us that do he feels like an old friend. I took our 2.5 year old twins and 7 year old boy to see the Gruffalo’s Child in the New Theatre.

Before going to the show my 7 year old was intrigued (he thought he was a bit old for it) and the twins were super excited. Both The Gruffalo and The Gruffalo’s Child are already regular bed time reads for them.

The set was quite eerie and instantly had our eldest hooked. The characters are expertly portrayed – and in far more detail and humour than the short book permits: The three cast members were energetic, loud and sprightly – exactly what’s needed to keep children of all ages entertained. The Gruffalo was very cleverly made and the twins recognised him instantly. Those of you who are familiar with the book will know that the title character doesn’t make an appearance until halfway through the story. But, within minutes of the production starting the Gruffalo came bounding onto the stage with a fantastic costume and provided plenty of amusement that more than lived up to the  anticipation.

The songs were unusual, but simple enough for the twins to enjoy and sing along with. The predators were funny enough for the show to be suspenseful, but not too scary for the kids to be frightened. The performance was just the right length too, I don’t think the twins could have sat for much longer. It was a perfect introduction to the theatre for them. A great family afternoon of fun, for all ages.

You Can catch the Gruffalo’s Child at the New Theatre

Bedknobs and Broomsticks Flies Into The Wales Millennium Centre