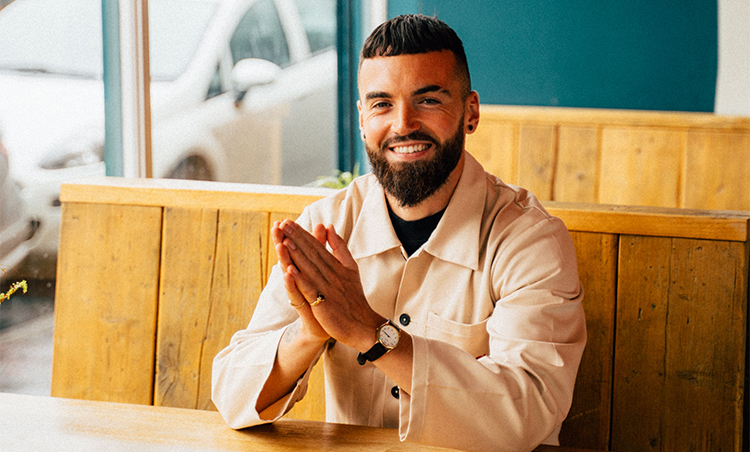 Internet Sensation Gaz Oakley has been wowing millions of followers with his innovative dishes for years, releasing multiple cookbooks and collaborating with some of the most famous restaurants in the world. Now he’s making a stir in the Cardiff restaurant scene with his very own vegan pop-up restaurant at Neighbourhood Cardiff. Open from June 23rd to July 3rd, fans and foodies will finally have the opportunity to taste Gaz Oakley’s acclaimed dishes cooked by the man himself.

Gaz first stepped into a professional kitchen 14 years ago and has been impressing the public with his talent ever since, publishing 3 cookbooks, gaining 1.4 million subscribers on his YouTube channel, avantgardevegan, and over 600 thousand followers on Instagram. His  mission is to bring revolutionary vegan cuisine to the mainstream, ‘veganising’ traditional dishes.

His most recent project, Nana O’s Comfort Food, is serving hearty, healthy, and delicious vegan meals for diners at Neighbourhood Kitchen. Gaz has dreamed of owning a restaurant since childhood, and after impressive collaborations with Wagamamas and Vurger Co., he is taking the jump to create his own unique brand. His creation of Nana O’s is inspired by his own grandmother, whose love and warmth he hopes to pay tribute to in his comforting meals.

Nana O’s pop-up restaurant will be hosted by Neighbourhood Kitchen on Tudor Street, a rotating street food kitchen which invites accomplished chefs to show-off their skills to Cardiff residents. With traders rotating every 2 weeks, Neighbourhood hosts all cuisines from hearty Jamaican meals to innovative British small plates, with specialist cocktail pairings designed by Neighbourhood to compliment each new menu.

Neighbourhood Cardiff is located at 80 Tudor Street CF11 6AL, just a short walk from Cardiff Central Station. It will be hosting Nana O’s from 23rd June to 3rd July, Thursday to Sunday for lunch and dinner. You can book your table here: https://neighbourhoodkitchen.co.uk/nana-os-booking/