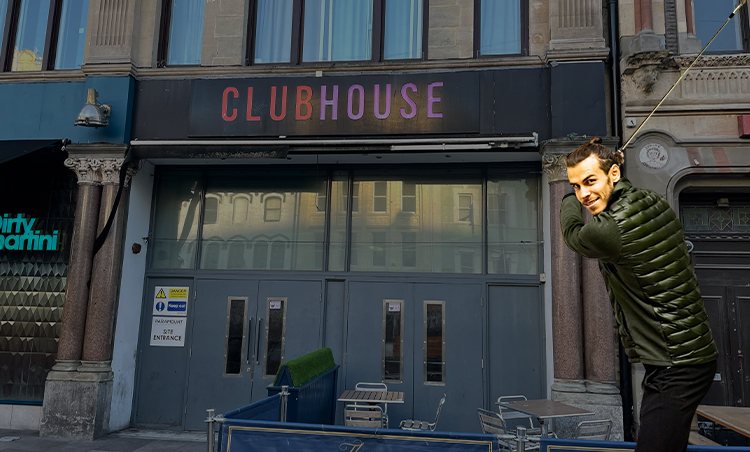 Postponed due to the pandemic, but now finally on the horizon, Par 59 will be teeing off to give Cardiff a mini-golf bar underneath the old Club House Bar.

Welsh Football Mega Star and Cardiff local, Gareth Bale, has teamed up with Depot manager Nick to launch somewhere for you to knock some balls around on your next night on the town. Following the success of other activity-based bars around the city like Boom Battle Bar, Chance and Counters and more recently NQ64 it’s great to see another one popping up now we can all get out a bit more.

After facing a number of delays due to the Coronavirus outbreak and subsequent restrictions, work on the original site stalled. But when a new, larger, city centre premises came to the market, the Par 59 team decided to scale up their ambitions.

Bale’s love of golf is no secret, its something he does to relax in when he’s not busy winning the Champions League. The idea is to create a fun environment that will breathe life back into a forgotten building in the centre of Cardiff. Moving into the site of classic Cardiff Nightclub Liquid & Life, which shut its doors in 2010 after a decade of being a main player in the Cardiff nightlife scene. The food for Par 59 will be provided by some of our favourites Dirty Bird and Sushi Life, a pair of a sensational independent and local foodie delights.

With the extra 5,000 sq ft they have acquired at the new site; they will add another mini golf course – taking the venue from two 12-hole courses up to three 9-hole courses which are currently being built by local company Wild Creations. A new billiards room will also be based on the second floor.

Nick Saunders, founder and Managing Director of The DEPOT, explained “The last 18 months have been a huge challenge, and the delays have been stressful and frustrating, putting all of our original plans back by almost two years. However, we are committed to Par 59, and really looking forward to the final push as we prepare to open.”

Cardiff-based Paramount Interiors has been contracted for the £1.2m fit out scheme, including an extensive M&E package. Richard Jones, Managing Director at Paramount Interiors, commented: “Par 59 is a unique addition to Cardiff’s iconic St Marys Street, and it’s a pleasure to be appointed on such an exciting scheme. Despite coming up against challenges whilst trying to move this project forward during the midst of Covid-19, the whole project team now look forward to successfully delivering Par 59 in time for people to enjoy come Spring next year.”

Wales star Gareth added, “I’m delighted to be working with a group of independent Welsh businesses to finally bring Par 59 to Cardiff. For me, it’s all about creating safe, fun environments where people can enjoy something a bit different, play golf, and meet with friends.”

Par 59 marks a second step into the hospitality sector for the star footballer, following on from the opening of Elevens Bar & Grill in Cardiff in 2017.

While Bale is no newcomer to the Cardiff Bar scene after launching Elevens in 2017, neither are his partners at The Depot. Astoundingly they only launched in 2015, but already have one the biggest regular events on a Friday night, Bingo Lingo, their own Food Festival and have hosted the likes of Kaiser Chiefs, Sister Sledge and Clean Bandit. Branching into the activity bar space seems only natural for them at this point.

One thing’s for sure we are looking forward to hitting the greens when Par 59 opens this year. Let’s hope the city’s streak of adding activity bars continues!

STORMZY confirms rescheduled Cardiff date - how to get tickets