Author It's On Editorial 817 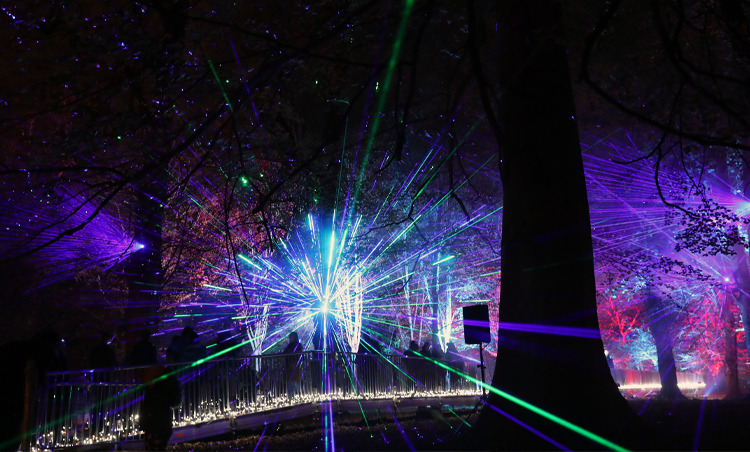 Christmas 2021 is officially underway in Wales after its biggest ever festive lights trail opened its doors to the public.

A host of familiar faces were invited to step into Christmas at Bute Park for a special preview night in Cardiff before admission to the general public opened shortly afterwards.

Special guests including the face of GoCompare and radio presenter Wynne Evans, broadcaster Jason Mohammed, TV and film actor Steve Speirs, TV host Lucy Owen and Welsh artist Nathan Wyburn were among the first to glimpse the magic of the trail for themselves.

Now, more than 130,000 visitors are expected to follow in their footsteps during the trail’s five-week run in Wales’ capital city, after a team of 25 technicians spent more than two weeks installing over one million twinkling lights to create the breath-taking spectacular.

The park has been taken over by laser shows, an enchanting fairy tree avenue, flickering fire sculptures and spectacular mirror ball displays after the trail’s creators spent more than two weeks on site laying 7km of cabling and 12,000 ground-protection matts to prepare.

Andy Smith from the company behind the trail, From The Fields, said: “We are honoured to have the opportunity to light up Bute Park and share in the Christmas spirit with the people of Cardiff. Following over a year of planning, it was great to see so many familiar faces come and share in that feeling of goodwill with us as we launched the trail this week.”

“It’s been an incredible effort by our hard-working technicians and crew so it’s a wonderfully rewarding moment to have finally opened our doors, and we can’t wait to share the experience with the thousands of visitors set to step into Christmas at Bute Park over the coming weeks and enjoy the magic for themselves.”

Christmas at Bute Park will take visitors on a breath-taking tour of festive delight around one of the capital city’s most beloved landmarks and through the biggest Christmas lights trail Wales has ever seen.

Culminating in a special ‘Sea of Light’ installation by Ithaca Studio, who have created stunning displays for Kew Gardens, Blenheim Palace, and Glastonbury festival, the trail is set to bring some much-needed festive cheer to Welsh shoppers and visitors alike up until, including, New Year’s Eve.

Local producers including Handlebar Coffee, based in Bute Park, Hello Good Pie from Treharris, Jol’s Food Truck from Merthyr and more will also be on hand for refreshments afterwards including churros and, of course, roast marshmallows over fire-pits.

For more information on Christmas at Bute Park and how to book tickets, visit www.christmasatbutepark.com