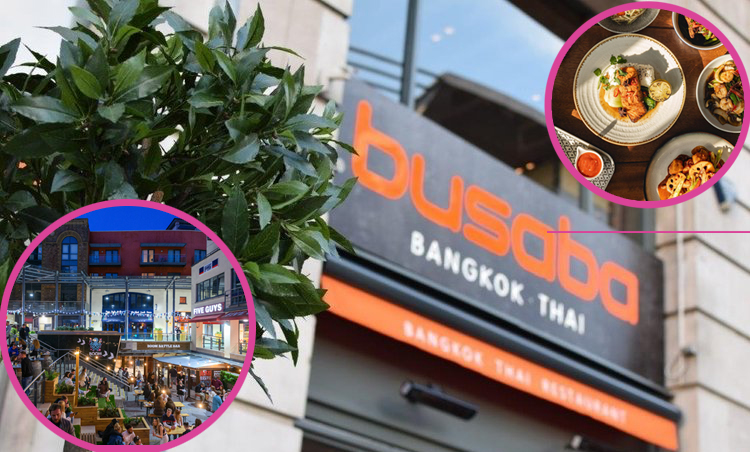 Busaba promises to bring the taste of the Thai Capital to Cardiff.

London based Thai restaurant chain Busaba will be moving into the old Bistro Pierre site in the Brewery Quarter. The company has agreed to a 15-year lease across the ground and terrace floors of the property, which will be home to Busaba’s first restaurant in Wales this October.

Busaba Eathai, which opened its first restaurant in Wardour Street, Soho, in 1999, has expanded to 12 sites across London, most recently launching a new restaurant inside the O2.

Spread across more than 65,000 sq ft, The casual dining chain will transform the former Bistro Pierre unit opposite Five Guys on the Caroline entrance, which has been purposefully designed to maximise both inside and outside space, a feature which has retained its popularity following the rise in outside dining during the past year. Busaba will further enhance the dynamic and diverse occupier line up at the scheme, whose current tenant mix includes Starbucks, Nando’s and Five Guys, alongside five other food and beverage tenants and two leisure offerings.

Customers can look forward to a selection Busaba best-sellers including Thai calamari, cooked with ginger and green peppercorns, and its classic pad Thai,  alongside Thai-inspired cocktails from the lychee martini made with kaffir lime-infused vodka to the Bangkok mule, made with Sang Som sugar cane whisky, ginger, limes and fresh basil, plus a range of beer, wine, fresh juices and lassis.

This follows an additional letting at the Brewery Quarter to leisure and entertainment specialist Boom: Battle Bar, which agreed to take c.12,000 sq ft across four units in the lower piazza towards the end of last year, and whose offering includes an eclectic mix of Bavarian Axe Throwing, Electric Darts, Crazier Golf and Beer Pong.

Ed Bales, Retail Asset Manager at Orchard Street, commented: “The selection of the Brewery Quarter as the location for Busaba’s first Welsh store is testament to the asset’s strong leisure proposition and prime location in Cardiff’s thriving city centre, while the restaurant’s unique dining concept will further enhance its impressive offering. With restrictions now lifting, consumers are once again returning to city centres in search of the best dining and leisure offerings, underlining the enduring human desire to interact and share experiences together.”

Terry Harrison, Managing Director at Busaba, added: “We specifically chose Cardiff for our first new opening since the pandemic began, as we see it as not only a fantastic, lively and fast growing city, but also a place brimming with discerning diners, who we can’t wait to introduce the Busaba brand to. The prime location and excellent use of inside and outside space at the Brewery Quarter provides a vibrant setting that perfectly matches our creative dining ethos, and we look forward to opening our doors to the public on the 21st of October this year.”

Elliott Shuttleworth, CEO at Boom: Battle Bar, said: “We looked at a number of schemes in Cardiff when targeting the city but I’m delighted that we chose the Brewery Quarter. Due to its constant high footfall rates – both from the nearby retail attractions during the day, and from the plentiful nightlife offerings during the evening, the store is consistently one of our top performers.”

Busaba will aim to open inside the Brewery Quartre from the 21st of October 2021.

Fatboy Slim Is Coming Back To Cardiff On His UK Tour