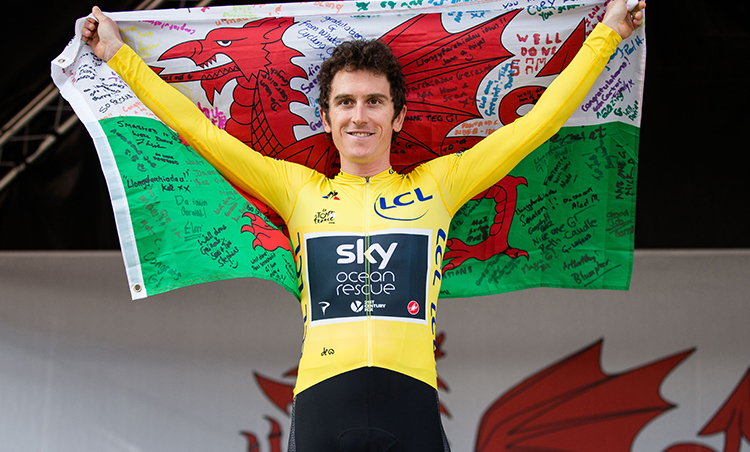 Our very own, home grown Tour De France winner Geraint Thomas  MBE will be the host at a  a not-to-be-missed live show, which will see the cyclist discuss his historic win with broadcaster Ned Boulting for one night only at Motorpoint Arena Cardiff on Monday 1st October 2018.
[qodef_button size=”” type=”” text=”Tickets Here” custom_class=”” icon_pack=”font_awesome” fa_icon=”” link=”http://bit.ly/2CossIv” target=”_self” color=”” hover_color=”” background_color=”” hover_background_color=”” border_color=”” hover_border_color=”” font_size=”” font_weight=”” margin=””]
The first ever Welshman to win the Tour de France, Geraint Thomas will return to his hometown to chat cycling – from the Welsh valleys to the cobbles of the Champs Elysee via Olympic and world titles. Geraint will reveal untold stories from the tour, and with the help of ITV’s Boulting, will relive the unforgettable moment when he crossed the finish line to secure his own place in the history books. Geraint will take a trip down memory lane to his early days of cycling with the Maindy Flyers Cycling Club in Cardiff and will explain to his hometown how dreaming big and working hard can lead you to the top of the podium.
Geraint Thomas, MBE is one of the most successful cyclists of all time. As well as winning the Tour de France in July, he is a double Olympic and triple World Champion, among an array of accolades. Growing up on the outskirts of Cardiff, Geraint always dreamed of being a professional cyclist and spent most of his free time at the Maindy Velodrome honing his skills.
Ned Boulting will be on hand to guide Geraint through his career to date. Ned is an award-winning sports journalist, television presenter and author who has been an integral part of ITV’s Tour de France coverage since 2003. He has completed two UK wide live tours, and his brand new tour, Tour de Ned, begins later this month
Tickets for the showgo on sale at 10am on Friday 7th September 2018 at motorpointarenacardiff.co.uk | 029 2022 4488
Preview post