Author It's On Editorial 992 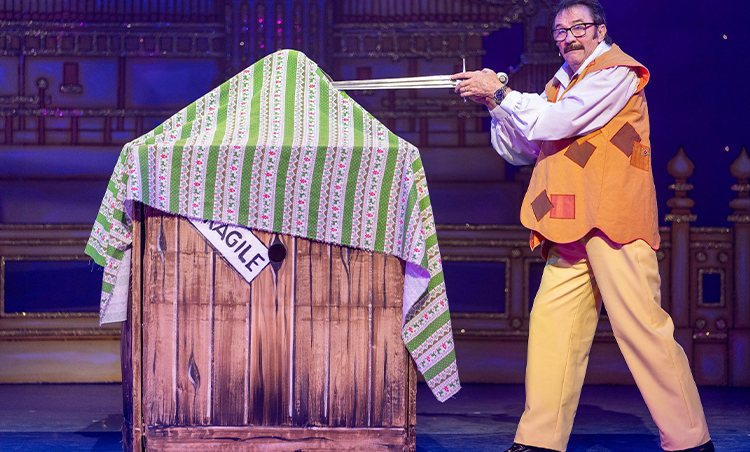 Panto season has begun, and for many of us – me included – a visit to one of these fun family shows is an integral part of the Christmas charm.

One of the first Cardiff pantos to open this year is the New Theatre’s production of Aladdin, which was postponed last year due to the pandemic. And you can tell how much this meant to everyone involved to be back on that stage.

After a year off this year’s performance promised to be a belter of show and it didn’t disappoint. Packed full of the traditional pantomime ingredients a festive audience would expect, Aladdin features laugh out loud comedy, stunning scenery, many beautiful costume changes, plenty of boos and hisses, great choreography and a flying carpet, it’s everything you could wish for in a pantomime.

This year’s show reunites some of the Cast from the pervious Aladdin  at the New Theatre, resident dame Mike Doyle who has been part of the new Theatre Family for 8 years , Stephanie Webber and Welsh rugby star Gareth Thomas, better known as Alfie, who has really settled into his role as the camp Genie of the lamp.

The audience is introduced to this Christmas’ ‘baddie’ early on, and Abanazar (played by Stefan Pejic) is greeted by the audience with a wave of booing and chants, as he is told by the lady of the ring Scheherazde – incantation which spelled out what the evil wizard had  in store.

After learning that Abanazar’s was on his way to the mystical land of Cardiff, We are transported to Peking where we meet Aladdin and his family – his mother Widow Twankey and brother Wishee-Washee Played by Paul Chuckle

We are introduced to this year’s comedy duo Widow Twanky (played by Mike Doyle) and her son Wishy Washy, played by none other than Paul chuckle, who were both excellent and bounced off each other throughout the show. The pair came on stage with their individual catchphrases and immediately got the crowed shouting “Orriiigghht” and “Hellooooo!” which was repeated throughout the show. Credit must also be given to the amazing amount of costumes worn by Mike Doyle, who had someting new to wear each time he came on stage.

Aladdin, played by Gareth Gates brought the appropriate level of zing to the production, along with a few of his own tunes and stunning new Physique.He really threw himself into his part, and showed no hint of the stutter he is famous for, even during a funny tongue twister scene which just shows how confident the performer has become. But the highlight of the show was just before the interval when Aladdin took to his magic carpet to escape the cave, knowing that it must have been some kind of crane making him fly. It wasn’t clearly visible to the naked eye, and the audience watched in amazement as the star flew above their heads.

I had no idea how much I had missed live performances until the show started and I turned to see the reaction from my kids sat next to me. The eldest has seen countless pantos and I had suspected that he might have outgrown our family trip – we dragged him along anyway – and it was refreshing seeing him laugh, smile and join in (and not look at his phone for a good three hours).

This was the first panto for my youngest daughter. She was stood up, clapping along and attempting to join in the pre-wedding group song, absolutely lost in the moment and laughing out loud.

This performance of Aladdin is a real spectacle of a show packed full of flamboyant costumes, slick choreographed dancers, fantastic special effects and humour for all ages. In short, it is one of the best panto’s we have seen over the years.

Author It's On Editorial 341
The Prodigy have announced a UK and European tour this November and December to tie in with their seventh studio album ‘No Tourists’ which...
Read More