Author It's On Editorial 210 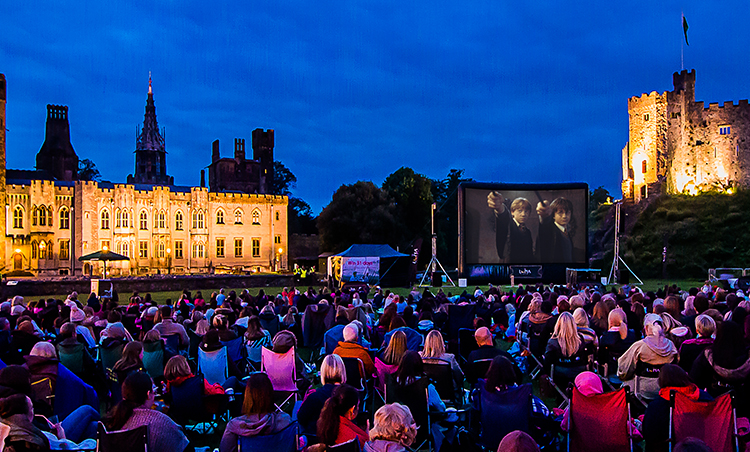 The Luna Cinema announces its 2020 season today, heralding the prospect of a film-packed summer to come, with over 150 screenings taking place across the UK’s most stunning and iconic locations – Arriving in Cardiff in September

Summer is on the horizon and that means The Luna Cinema’s 12th consecutive open-air film season is too!  After a somewhat turbulent first few months to the year, we’re all needing to look forward to summer evenings in gorgeous settings, enjoying a great film on giant screens under the stars.  Each Luna screening will take place in the fresh air, and with a commitment from organisers to offering 1m² per audience member, ensuring guests have space to kick back and enjoy the setting.

Established venues in the Luna season include sites such as Hampton Court Palace, Warwick Castle, Leeds Castle, Westminster Abbey, Cardiff Castle, Kensington Palace, and the Royal Botanic Garden Edinburgh, to name a few. New venues for 2020 include the Royal Hospital Chelsea, Hyde Hall in Essex, Brompton Cemetery in London and Croxteth Park in Liverpool amongst others. Also returning to the line-up for 2020 is Blenheim Palace, one of the truly jaw dropping backdrops for a night of outdoor cinema.

From September Film fans are in for a treat with the amazing line-up of box office greats and award winners this summer season, with the Oscar winning Rocketman, featuring Golden Globe winner Taron Egerton as Elton John. Drama lovers are also set for a thrilling time watching this year’s box office big hitters, Joker and Judy, starring Joaquin Phoenix and Renee Zellweger in the respective titular roles. The season also features screenings of the year’s most critically acclaimed releases such as Parasite, Jojo Rabbit, Knives Out and Tarantino’s award winning Once Upon A Time In Hollywood.

Alongside the return of musical smashes Grease, Dirty Dancing and The Greatest Showman, audiences will be able to sing along to their favourite tunes!

Celebrating Hollywood’s golden era will be screenings of some of the films you simply have to experience on a big screen, including Some Like It Hot at Kenwood House and Singin’ in the Rain at Kensington Palace. There are also special anniversary screenings taking place, with the 40th anniversary of The Shining at Regent’s Park Open Air Theatre, and the 30th anniversary of Pretty Woman at both Regent’s Park Open Air Theatre and Royal Botanic Gardens Edinburgh. All in all, it has the makings of a vintage summer of cinema under the stars.

George Wood, founder of The Luna Cinema, said: “We are thrilled to announce our sparkling new season for 2020 – another summer jam-packed with truly great films shown in some of the UK’s most iconic and beautiful locations.  It’s been an incredible year for cinema, with such a varied range of award-winning releases and box office hits.  We’re confident we’ve curated a programme that celebrates them all, alongside the films from the last 50 years that we think lend themselves best to a night of cinema under the stars!

Whilst in the current climate, our thoughts are predominantly concerned with the health of our audiences and staff, we’re all hopeful of being able to deliver a wonderful summer season later in the year, where people can attend our cinema events to enjoy a couple of hours of pure escapism – something that cinema does better than anything else.”

Other season highlights include screenings of Academy Award Best Picture winner, Parasite at Wandsworth Park and Victoria Embankment Gardens, Star Wars The Rise of the Skywalker at Lulworth House, Lincoln Castle and Danson House in Bexley, and Judy at Opera Holland Park. Guests can also immerse themselves in a world of grandeur at screenings of Downton Abbey at some of the country’s most historic sites, including Knebworth House in Hertfordshire, Leeds Castle in Kent and Harewood House in Leeds, where key scenes from the movie were filmed.

As always, The Luna Cinema audiences are welcome to bring along picnics to screenings. However, all events will have fantastic gourmet hot food for sale and a full bar on site.  New for 2020 is the VIP Sofa package. This includes a luxury beanbag sofa for two, along with a bottle of prosecco, popcorn and even a blanket to keep you cosy as you watch the film.

To book tickets and for more information visit www.thelunacinema.com

Author It's On Editorial 115
Cardiff loves it’s bizarre food and drink festivals – we’ve had nugget, rum, Caribbean and cheese events to name a few. But there are two things that...
Read More

There’s going to be a silent disco inside Cardiff Museum